Do the people around you feel like you’re constantly criticizing them? How often do you hear someone say, “stop picking on me,” or “you always tell me I’m doing something wrong?”

You might not even realize you’re making perverse statements to the people you love.

It doesn’t matter if your comments are made with good intentions or because you love the person so much you want to help them. Unsolicited advice can sometimes get you into trouble. Especially, if the person perceives you as someone who constantly dishes them a big serving of negativity.

Perception is reality. If someone thinks you’re constantly picking on them, even if you don’t think you are, that’s their impression.

Recently, an interaction with my daughter caused me to really stop and think about this. My daughter was in the kitchen, getting her breakfast and making a mess.

She went to get a bowl out of the kitchen cabinet and the cabinet was left open. She poured the cereal and crumbs went all over the counter and onto the floor. There were remnants of milk all over the table from pouring the milk into the cereal. I just sat and watched the kitchen get destroyed. I tired to keep my mouth shut. I tried not to say anything. 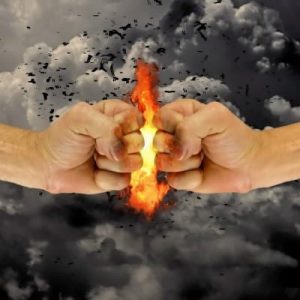 But, it was painful and hard.

That’s when it happened.

She reached her hands into the bowl of fruit instead of using the serving spoon that was sitting there. It was the final straw. I didn’t mean to raise my voice. I didn’t mean to say something negative or criticize her.

“Use the spoon,” I said and then added, “and you’re making a mess. You need to be a little neater when you do things. Look around this kitchen. It looks like a tornado went through it.”

“You’re criticizing me,” she said.

I could tell her feelings had been hurt. Maybe it was the tone I used or the fact that it was early in the morning and we were all a little tired and sensitive. It wasn’t my intention to make her feel like I was picking on her. I just wanted her to realize she was making a mess.

“I’m just trying to help you,” I told her. “You aren’t a toddler. You’re a teenage girl and you need to be neater when you do things.”

“It feels like you’re picking on me,” she said, “with your little comments.”

We talked about it, had a good conversation and we both felt better. I wanted her to understand that she needs to clean up after herself and that it isn’t nice to expect me to do it for her. Especially since I had just cleaned the kitchen the night before. She felt better because she understood it wasn’t my intention to hurt her feelings.

Since this interaction, I’ve really tried to watch the unsolicited advice I give to my loved ones. If there’s something I feel they need to hear, I choose my words carefully, say them nicely and with a positive spin.

Like most things, it’s all how you say it.

Remember this the next time you need to say something that could be perceived as being negative. You don’t want to hurt someone’s feelings or make them feel like you’re criticizing them. Plus, the message is received much better when the person senses it’s coming from a place of love.

If you enjoyed this post, check out my recent Huffington Post article about Hosting An Exchange Student.