Sister drama: the drama that occurs between female siblings.

It’s funny how children from the same parents, living in the same household, can be so different. My two daughters are similar in some ways but very different in others. I love and embrace each of their distinct qualities and it makes life fun. Sometimes, we have a little drama because of it.

Whenever we go out of town as a family, we usually get one hotel room with two beds. It makes it so we only have to pay for one hotel room.

I’ll choose saving money over having sex any day.

Recently, were gone for a couple of weeks and thought it would be nice for everyone to have more room. The girls had their own room and we had ours.

Things were going well, until they weren’t.

The girls were living in close quarters and spending a lot of time together. A recipe for “sister drama” to unfold. Sharing a space together is particularly hard for my youngest daughter. She likes things to be neat and tidy. She likes her things to be in their place. She can’t stand having a huge mess.

My oldest daughter, on the other hand, is the complete opposite.

Wherever she goes, she creates a huge mess and usually doesn’t even notice. Her clothes are everywhere and she doesn’t care. When I went into their hotel room, one side of the room was clean and neat the other side an absolute mess. 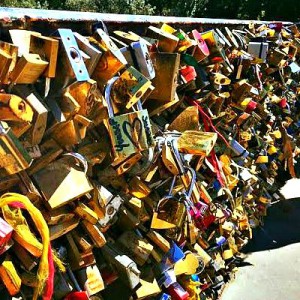 Take the key and lock it up.

We weren’t surprised when our youngest daughter came to us, in the middle of our vacation, crying and telling us she “couldn’t take it anymore.”

“I can’t live like this,” she said. We talked to our other daughter, forced her to clean up her things, and moved on.

Disaster avoided. Or, so we thought.

A few days later, some of my bathroom products seemed to have disappeared and I didn’t know where they were. I was perplexed, until I learned what was really going on. My youngest daughter had gotten fed up with her sister using all of her products: brush, toothpaste, deodorant, perfume and hair ties. She decided to lock all of her items in the safe in their hotel room.

She LOCKED her toiletries in the safe in the room so that her sister couldn’t use them.

And, since my older daughter didn’t have access to her sister’s stuff anymore, she was taking mine.

“Didn’t you bring your own things?” I asked, after learning what was going on?
“No,” She said laughing, “Why would I need to do that when I can use yours?”

Classic. A sure recipe for sister drama.

It’s important to have boundaries and for members of a family to respect one another. I don’t like people taking my things and I’m sure you feel the same way. Respecting the belongings of other people doesn’t seem like a hard concept to understand but it’s amazing how easily this can be violated. Especially when you have kids who want to use something that belongs to their sibling. Set up rules and teach your kids the value of respecting other people’s property.

As for using the safe in the hotel room, I think that was going a little too far.

Feeling a little off? A recent Huffington Post article that can help: Have You Lost Your Sparkle?