I was reminded recently of the importance of being able to say “I’m sorry.” Mistakes happen, no one is perfect and it’s absolutely OK.

I made a mistake. It wasn’t a life altering mistake but it was an error that impacted other people.

My oldest daughter turned seventeen and to celebrate, we had a party for her. She wanted her favorite food from her favorite restaurant. It’s a chain restaurant with one location in our city, but there are several locations near surrounding areas.

I ordered the food several days in advance, and called again the day of the party to give the restaurant our final count. Everything was in order. My husband planned to pick up the food on his way home from work, around 5:30PM. The party was starting at 6:30PM.

It was all organized.

It was all planned ahead of time.

I was feeling excited about my daughter’s fun party.

My husband called me at 5:30PM and informed me that he was at the restaurant and they didn’t have any record of our order.

“What did you say?” I asked my husband. I thought I might be hearing things wrong.

“They don’t have your order and there isn’t any food ready.”

“How is that even possible? I asked, “Let me talk to the manager.” I could feel myself starting to get a little worked up.

A nice man got on the phone and told me they didn’t have a record of my order. 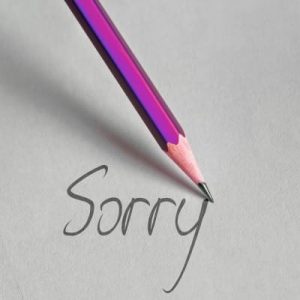 I explained how I had ordered the food in advance and even called earlier that day and spoken with someone from his team. “This doesn’t seem very professional,” I said in a grumpy voice.

“Do you think you could have called a different location?” the manager asked me. Did he think I was wrong? Did he think this was my mistake?

“Of course not,” I said, “I used the phone number stored in my phone,” I quickly said, “I’ve called this location many times before.”

I told him what we needed and he promised to get the order together. When we got off the phone, I decided to call the number stored in my phone, just to make sure it was the correct location.

Guess what? You know where this is going…

The number in my phone was to a location in another city. I was perplexed. I was stunned. I was very aware that I was wrong. The restaurant hadn’t made the mistake, I had. I quickly called my husband who was waiting for our food.

“Please apologize,” I said to my husband, “Tell the manager it was my fault and I was wrong. Please tell him I’m sorry I was grumpy with him.”

Mistakes happen, and this time I was the person who had messed up.

Our food was made, the party was great and my daughter had a fun night. But, I couldn’t help but reflect on what had happened. I was so sure the restaurant had messed up. I was quick to place blame and point a finger somewhere else.

If you make a mistake, just apologize and say “I’m sorry.” It’s not a big deal to mess up. Laugh at yourself and instead of placing blame, fix the mistake. Instead of being grumpy with the manager, I could have just focused on finding a solution to the problem. It was a good reminder to me that even the best intentions can easily get messed up.

Don’t expect life to be perfect. In fact, manage your expectations and understand there will always be bumps along the way. It’s just part of the experience. Instead of spending your energy pointing fingers, find a solution.

And, when you do make a mistake, don’t be afraid to admit it and say “I’m sorry.”

Check out my recent Huffington Post article: To Our Daughters: You’re Good Enough Just The Way You Are