Fun in the Sun

You don’t have to be a meteorologist to recognize summer is here! It’s hot outside. Hopefully, this summer, you’re able to get away from your daily routine and have a little family fun time. Whatever that means for your family.

It’s nice to be a little lazy, enjoy fun in the sun and those long summer nights, and take advantage of doing “summer” things.

When we were kids, summer vacation didn’t feel so long. In fact, it always seemed like I was just getting into the groove of summer when out of nowhere, August came around, and back to school I went. Back then,  summer days were spent running through the sprinkler or going to the pool, riding bikes, and eating popsicles. If we were really lucky, getting ice cream from the ice cream truck.

It was simple. And easy.

But it’s different, now, being on the Mom side of things.

Summer can feel long, and there’s a fine line between having too much structure and not enough. Between being laid back or bored. Between feeling relaxed and feeling like summer is dull. I don’t want to plan too much, but I don’t want my kids to sit around the house and fight all day. There’s a balance to be found, and sometimes, it can be a challenge.

Too much fun isn’t fun, and not having enough plans can be a recipe for disaster.

But time does go by quickly. Really quickly. 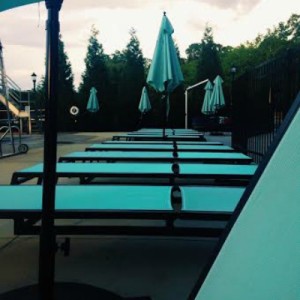 Have a little fun in the sun with your family this summer.

My kids are older now, almost 13 and 16, and keeping them happy in the summer is starting to get a little easier.

I can’t say I miss the bags filled with pool toys, swim diapers, and enough sunscreen to protect an army. In those days it felt like it would take hours and a huge amount of energy to get from our house into the actual water at the pool. And by then, it was almost time for the kids to take a nap. And me. It was exhausting.

Instead of a family outing to the pool, now, my kids want to just be dropped off. Instead of pool toys, they have cell phones. Instead of me lathering the sunscreen on, I have to trust that they will take care of it themselves. It is a little strange, I have to admit, but I’m not complaining.

You want school to start, and to reminisce about this summer with nostalgia. You want to say, “This was the best summer we ever had.”

Realize in August, they’ll be back at school, and this time with them will be over.

So make the most of it and recognize it for what it is, the chance to spend time with your kids without having to worry about homework, basketball practice, and the normal school routine.

One day you’ll be the Mom dropping off your kids at the pool, and wondering where the time went.